Crape Myrtle Bark Scale – a New Pest for Our County

Find this article at:
go.ncsu.edu/readext?567152
— Written By Anelle Ammons

Crape myrtles have been known in the past as a great landscape tree that needs little maintenance, has few pests, and is impossible to kill. However, a new nonnative species of scale, crape myrtle bark scale (CMBS), has moved into Catawba County. 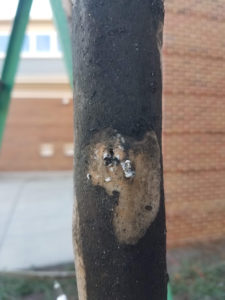 What to look for

CMBS is a scale insect that attaches itself to the bark on crape myrtle trees. It is often white and fuzzy, and can have a pink discharge when squished. As with other scale insects, the females attach themselves to the trees and begin to feed. The female will then lay hundreds of eggs, which will hatch out into young crawlers. It is estimated that between two and four generations will occur in a growing season in the Southeast. With all of these insects on the bark, their waste, called honeydew, is a sweet, sticky liquid that sooty mold will quickly grow on, causing the trees to turn black. While it can be sometimes easier to see the sooty mold on the larger parts of the bark, often the smaller branches will have larger infestations.

Infestations can often be greater on small branches.

CMBS is not typically fatal, though it can make your trees very unsightly if a large infestation is left unchecked. It is a good idea to inspect your crape myrtles regularly, especially in the growing season, to see if you have any sign of white, felt-like insects attached to the bark or sooty mold all over the trunk. Sometimes, though, heavy aphid infestations can cause sooty mold accumulation on the tree, so it’s important to look for the scale insects themselves before choosing a treatment.

Because CMBS is relatively new to North Carolina, researchers at NC State University are still working to determine the best treatment options for our area. Research out of Texas suggests that using an insecticide that is drenched around the tree for it to take up, such as the active ingredient imidacloprid, can be one of the most effective treatments. This treatment would be applied around March or April as the trees are starting to leaf out and take in nutrients through their roots. That way, the treatment can be taken in through the roots and distributed throughout the trees. 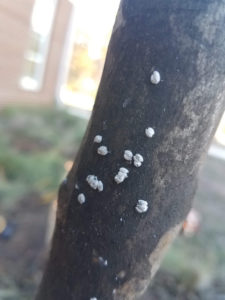 The bad news is that CMBS has reached our county and will continue to spread. The good news is that it is not fatal to trees and we can treat them. Because only the male insects fly, the spread across our county will be slow. Keep an eye on your trees through the growing seasons, and treat early to avoid too much infestation.

You can aid your crape myrtles by keeping them in peak condition. Trees that are healthy are less likely to succumb to an infestation. To keep your trees healthy, prune them only in late winter before spring leaf out. Instead of topping them back to a bare stump all the way across, prune out only branches that are weak, diseased, infested, or rubbing on other branches. When making pruning cuts, make sure to cut back to another branch or split. The less pruning you do, the less cuts will be open to allow for disease and insects to exploit.

Consider giving your crape myrtles some fertilizer in spring once they have started to leaf out. Having nutrients available allows trees to grow stronger and healthier. With a little tender love and care, your trees should remain healthy and better able to fend off an incoming attack.

If you have questions or concerns about if your trees might have CMBS, email me some pictures or give me a call.

We also have a few other email lists you can subscribe to.